I am not sure who or where to put this, but I think I have the grand slam going on right now. I bought an Mk1 a long time ago, just after the kickstarter campaign. I messed around with it and got it set-up to at least collect some data. I've been using the csv file to look in excel, and it is has been working all along to get some thing so that I can look at. My dad just bought a different datalogger and suggested that I upgrade the firmware to see if we can get the data to talk to one another.

Okay, so that leads us to today. I have a W7 x64 laptop that has the firmware flasher (latest version for Mk1 2.8.7). The driver for the flasher works, but the driver for the unit itself does not seem to work. When I run the flasher utility, it gets to the press any key to update firmware, which I press. When I do, the cmd prompt flashes very quickly and disappears. This seems better than search for device (which it did this before too), but not very reassuring. Is this a good thing??
Then, I thought, I'll manually update the drivers with the unit plugged in. The problem, I can't find the device driver anywhere in the driver database other than the bootloader utility driver (which does seem to work).
Then, I thought, well at least download the latest app to see if I can see the unit (latest version, 1.4.2). When I do that, I get an error message "Kivy fatal error" with the description in Chinese. An uninstall/re-install did not fix this. A reboot did not fix this either. (same with the driver troubles described above)

This is a different laptop then the one I originally set-up the unit with because I believe that laptop died. I do have some screen captures from my laptop if it would be helpful.

Hi kcolbey, sorry to hear you are having problems.

First, you should verify you have the USB drivers installed for Win7, they are located here: https://autosportlabs-software.s3-us-we ... ta7_V2.zip

Once that is installed, when you plug in RCP, you should see it listed in the Device Manager application. Once that happens you can work on updating RCP's firmware.

Once that works, you can update RCPs firmware (make sure to press the button on the device while plugging it in). Instructions here in case you need them: https://www.autosportlabs.net/RaceCaptu ... e_Firmware

For the Kivy App problems, that error is most likely due to old Windows video drivers. Search for new drivers for your video card. The RaceCapture app requires OpenGL 2.0 support.

Hope that helps! Let us know if you have more questions.
Ryan Doherty
Autosports Labs
Top

Sorry it has taken so long to respond, I have been super busy lately. It does not seem to reconginze the device when it is plugged in. Here is a screenshot of my device manager with the unit plugged in.
As mentioned, I think the bootloader driver installed correctly, but the regular driver does not.
Also, I will try to look for a new video card driver. Is OpenGL 2.0 something I should download and install separately? 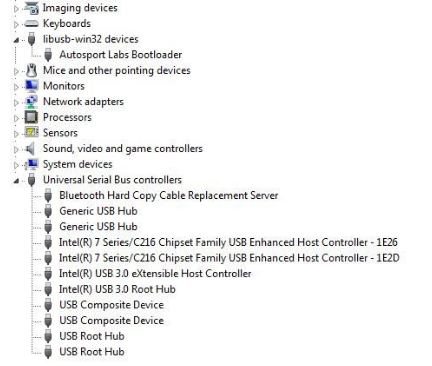 Hi kcolbey, can you see what is listed under COM devices in Device Manager? RCP should be listed there. Thanks!

OpenGL 2.0 is a specification, what you should research and download is any updated drivers for your video card. The information for the drivers may or may not specify if it supports OpenGL 2.0.
Ryan Doherty
Autosports Labs
Top

Ryan, there has been progress!!
I did as you suggested and looked for the latest video drivers. I also happened to look through the changelog and noticed lots of OpenGL compatibility changes/fixes. Now, the app works on my laptop.
On to the bad news, there is no COM devices listed when the unit is plugged in. The Racecapture app does not connect to the device either. I am pondering to delete the bootloader driver, unplug the device, then plug it back in and see if windows will go through and throw a "can't find driver" dialog.
Any other suggestions?
Top

I see in your screenshot above that the Autosport Labs bootloader is showing up. Question: is this happening when you simply plug in RCP or are you enabling bootloader mode to see this, by pressing the button?

If it's showing up like that without pressing the button, then it's stuck in bootloader mode.

Try performing the firmware update process with 2.8.7 and see if that gets it further.

If not, what does device manager show when RCP is simply plugged in?
Brent Picasso
CEO and Founder, Autosport Labs
Facebook | Twitter
Top

It shows the bootloader driver when RCP is plugged in, and only the two lights are on. Maybe it is stuck in bootloader mode?
The firmware update does not work. For some reason the cmd flashes and disappears during the error. For the split second, I can see it says "unknown" and/or "driver" but I'm honestly just guessing.
Is the button press supposed to have all of the lights flash? All mine does is keep the one power light solid, the GPS light blinking and the logging light blinking, as well as the red to show there is no SD card.

My parents have a W10 laptop, I might try that this weekend.
Top

it almost sounds like a failed firmware upgrade is causing the firmware to fail updating and it's stuck in bootloader mode.

Regarding that, once firmware is successfully programmed, Win 10 actually has a built in driver that will work with RCP (MK1 and MK2)

You could try a Windows 7 or Vista box as well. Key is to get the firmware successfully programmed, then it should spring to life!
Brent Picasso
CEO and Founder, Autosport Labs
Facebook | Twitter
Top

I did some more thinking and playing around to see if I could make something happen. I tried to delete the driver for the bootloader and plug the device back in. When I do that, it goes directly to the bootloader driver. So it does seem that it is stuck in that mode.
However, it still will not flash the drivers. I thought that maybe if I went through the dos prompt to flash the driver the window would not disappear. That suspicion is correct, so now I have a screenshot of what it says!
I attempted to use the correct steps to get the device into the bootloader mode again with it in DOS, but still no luck.
Would you guys be amicable to me shipping (or delivering) you the device and you guys have a look at trying to flash it?

Hi, thanks for checking it out. ping us at [email protected] and we'll take it from there.