I've had a lot of trouble with WiFi connections since I've had this MK3 unit. I know some of it was hardware because I had to send it back, and was told it was repaired, but never told what the issue was. I don't think it's hardware related this time, but can't say for certain. When running the Poll log, I don't find anything that I feel is out of the ordinary.

Recently, I started having two issues that seem to be related to each other.

I use a GoPro 3 for recording the races. It was connecting to the MK3 via WiFi, generally without too much trouble, but intermittently it would not connect. Now, I have tried everything to get it to connect, and it will not. When I say it won't connect, it shows it's connecting, but when the MK3 begins recording data (whether it be auto or manual), it does not trigger the GoPro. The GoPro shows it's connected, and has the flashing blue light indicating it's standing by. The MK3 will begin recording data like it should when triggered - both manually and auto. I've tried resetting all related settings on both the MK3 and the GoPro with no luck.

Similarly, I've had issues with my Galaxy S6 connecting to the MK3. Usually, it will connect with no problems, but at times it just plain won't connect. Eventually, I can turn everything off, let it sit for a little bit, and then turn everything back on, and just maybe, if I wait for the Galaxy to establish contact before opening the RaceCapture app, it might connect. Usually though, I don't have to do anything except turn the galaxy on, and the RaceCapture is connected. Why the difference, I have no clue.

Today, I decided to pair the Galaxy via Bluetooth, hoping for better reliability. If that doesn't work, I'll have to go with something else for my gauges if I can't get help from this forum. Not being able to connect when it's time to take the track just isn't acceptable - since that then means I have NO gauges except the 3 mechanical gauges I installed already for just this reason.

One other thing that might help. Today, when I was trying to get the Galaxy to connect, it was showing it was connected (in the phone, but not the RaceCapture app - which is typically the issue with I can't connect). I had tried everything I could think of. Then, I disconnected the GoPro, and shut it down and the Galaxy immediately connected. I can't vouch for whether turning the GoPro off was related or coincidence, but that's what took place. I then tried the GoPro with the Galaxy shut down (again), and GoPro still is not triggering.

I would appreciate it if someone can help me get these two issues fixed.
Top

For Android, we recommend going with the Bluetooth connection as it has an edge on performance and latency, being a lighter-weight protocol than WiFi.

For the WiFi client connection to the GoPro, check that the client shows "Connected" under System Status/WiFi. This will mean that it is connected to the GoPro's WiFi connection. (The screen shot attached shows the screen, but with the client "Disconnected")

You can do a static test (without driving) by binding the configuration channel to something like RPM (example: Trigger above 1500 RPM).

It is a good idea to watch for log messages when it's attempting to trigger the GoPro camera, to see if anything is amiss; the messages could provide a clue.

We've found the GoPro especially particular when it comes to it's settings - WiFi has to be running, and the GoPro must be in "App Mode", to receive WiFi start/stop commands. Once it's in this mode, it's best not to power cycle the GoPro until you're done with racing. A great option is to keep it constantly powered with a 12v USB charge cable. 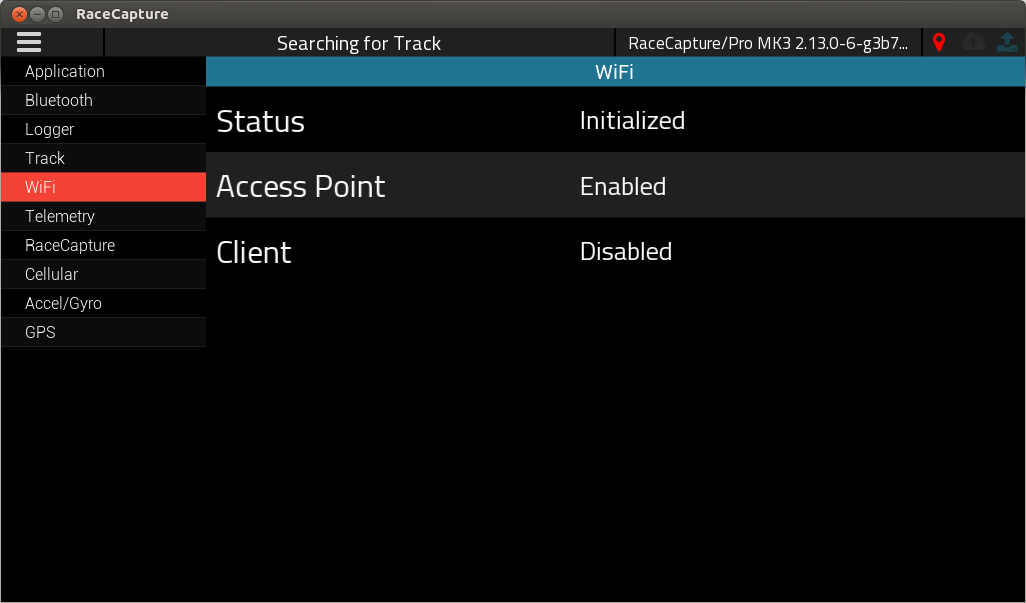 I forgot that page exists. I'll check it and get back with you on it with what i find. I'll also look at the pol log when attempting, and see what takes place.
Top

I'm not finding that page. Where do I find it? I think you have a different version of RaceCapture. Your photo shows 2.13.0-6. I show I have 2.13.5. is that page available somewhere else in my version? I think I've seen it, but it might have been before I did one of the updates.
Top

I was able to find the page easily enough, and now the system is working as it should. The only change I made was (since I had the data logger out of the car) rather than use RPM to trigger it, I used pitch to trigger it. Since RPM was previously triggering the data logger, I wouldn't think that change would make it start communicating properly with the GoPro. Oh well. At least it's working now, and I know how to check the RaceCapture page to make sure the GoPro is talking to it before I take the track, so I'll know whether I need to manually start the GoPro or not.

I tried the MK3 in my car, but didn't realize I had to have the GPS hooked up to it for it to log anything I could use. I'll have to try it again later to test the stability of the accelerometers.

Thanks for the help.
Top

Thanks - that's good to hear, let us know how it goes at the next race.
Brent Picasso
CEO and Founder, Autosport Labs
Facebook | Twitter
Top
Post Reply
7 posts • Page 1 of 1