Very nice, Brent. I will definitely use the cranking advance and probably tha aux input too.
Top

With the feature 'creep' on the V4 controller we've decided to extend testing another two weeks- General availability for V4 will be on June 8 2008.

Hardware looks good, as expected since the essential bits are a re-casted version of V3.

Firmware is where the complexity is- we have out all of the expected features for V4 and have the following hard and final list of enhancements.

Aux Input capability
The Auxiliary input will allow you to calibrate the raw voltage to a scaled value, very similar to the load axis on the ignition map. This way you can map temp sensors and other sources to some meaningful value.

User defined output state for Aux Input
In addition to RPM and Load, the Aux input will now be able to trigger a user output.

Cranking advance
The cranking advance will move to a setting in the global configuration options rather than at map location 0,0.

I regret the delay, but as you can see there are significant improvements at hand with V4!

If you have already pre-ordered and are dying to get your V4, and are willing to deal with possible firmware updates and/or other issues, PM me offline with your order number and we will see if we can get your oder out a week earlier - by the 30th of May.
Brent Picasso
CEO and Founder, Autosport Labs
Facebook | Twitter
Top 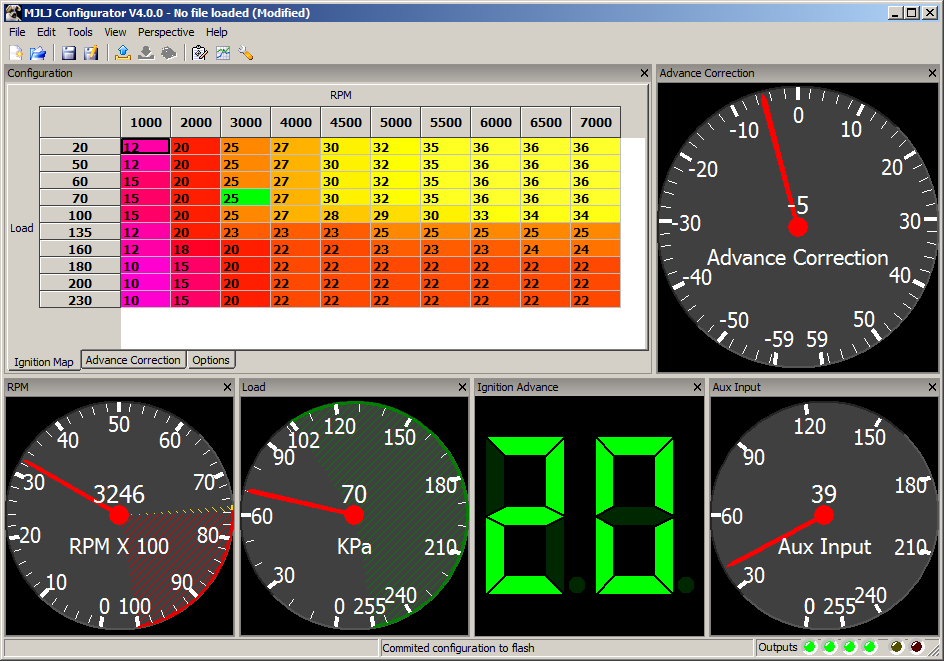 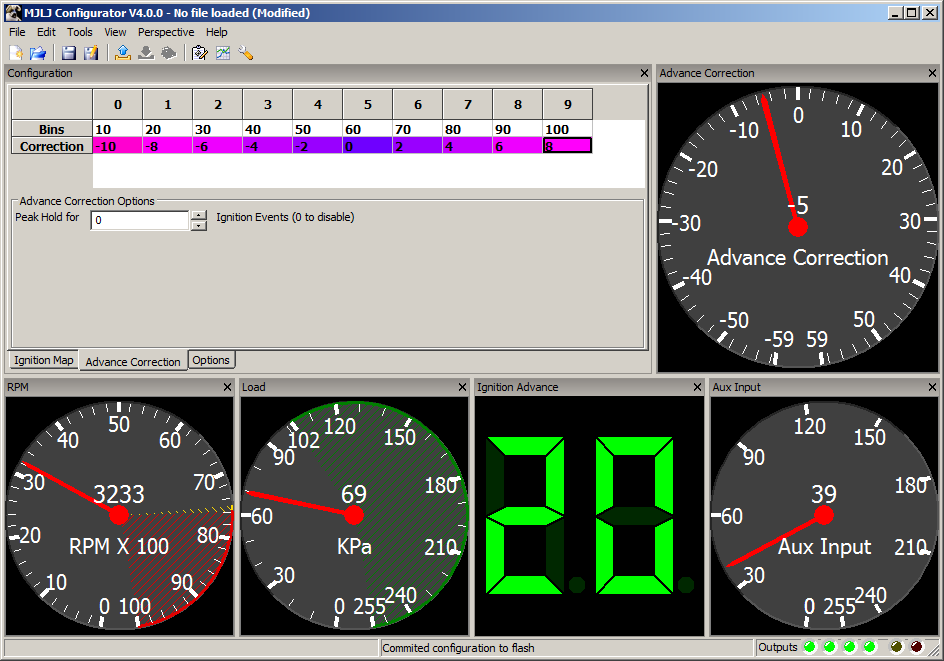 Could you explain what you mean by 'Advance Correction', and how it would apply to the engine's ignition? I'm not sure I understand what it's there to achieve.

The Aux input channel can be used to adjust the ignition advance calculated from the main ignition map. This adjustment- or 'correction' can be up to +/- 59 degrees.

When the aux input channel is read, the correction value is selected from the correction table based on the bin selected. In the example illustrated, we're reading a value of '39' from the aux channel. The bin selected is #3 (actually between 3 and 4). The interpolated ignition correction value is -5 degrees, and this is added to the ignition advance read from the map. So, 25 degrees - 5 degrees = 20 total degrees of advance.

This opens a whole range of possibilities: adjusting advance based on a reading from a temp sensor; reacting to a signal from a wideband unit, external knock sense module, a knob on the dashboard, and so on. The peak hold feature adds another dimension, and having the user outputs support the aux input layers on even more capability.

Here's an example of how we are immediately benefiting from the Aux Input: Our turbocharged MR2 needs active cooling for the intercooler at low speeds. A sensor measuring air temperature at the exit of the intercooler will trigger one output when the temperature exceeds a set threshold, this will drive a fan. A second output at a higher threshold will activate a water spray.
Brent Picasso
CEO and Founder, Autosport Labs
Facebook | Twitter
Top

Ah - I understand - so it could adjust the ignition setting depending on the current AFR reading, for example? Sounds useful - but it'll be another complicated thing to set up!

David, right on. This is very exciting stuff!

V4 will be perfect for my next project, a twin plug 2.7l flat six(Porsche 911 RS-spec)
Top

Just a quick one, would it be possible to add a user defined box in the settings to rename the "aux input" in the dial view to say "temperature" of "AFR" etc??

hi brent ,hope your well and the mr2 is keeping cool,
, heres an idea , i have a turbo xs knock lite on my mini ,that one tunes to the engine and seems to work v sensitively ,
it fires a red and a green led for mild knock ,and a red one for harsher knock , could the signal to the led's be tranferred to the mj to set off a level of overall retard just while its lit up ?and then of course another level for the hard knock !

I'would also be interrested in installing knock sensing.
Whit this it's mutch safer to find the limit not?

I suppose the LED outputs of that knock sensor could be hacked up to output a stepped voltage to the AUX input- then, you'd be able to act upon it.
Brent Picasso
CEO and Founder, Autosport Labs
Facebook | Twitter
Top

There is a four pin output connectur shown in the installation sheet, including
a knock output signal. Interesting...

Is is too late to plead for more than one switching event definable for each user output? For example, you might want to run a boost limiting valve on a turbo that opens at Xrpm but closes at Yrpm, once the engine has passed its peak torque range that would have broken things using full boost.
Top

Unfortunately, configuring ranges on the user outputs is out of scope for this release. I'll put it on the list for future consideration.

you can probably get the same effect by using two outputs in a logical "AND" configuration- one output turns on at a threshold, the other turns off at a different threshold. The solenoid will only be activated with both outputs are 'ON'.
Brent Picasso
CEO and Founder, Autosport Labs
Facebook | Twitter
Top
Post Reply
47 posts