hi, received the megajolt kit last friday, and a hours mad soldering (including downloading the instructions) and the unit it up and running, all straightforward!

rigged the edis pickup/ trigger wheel on the my lathe, and spun it up, advance changing with revs and tps changes!! Hurrah!!!


the next one was the serial link, with the joys of vista, and no serial port, but a prolific serial convertor seems to be doing the trick, and now have comms!

just got to get the engine back in the car (had some other tweaks, and core plugs to replace) and I should be sorting a map out! 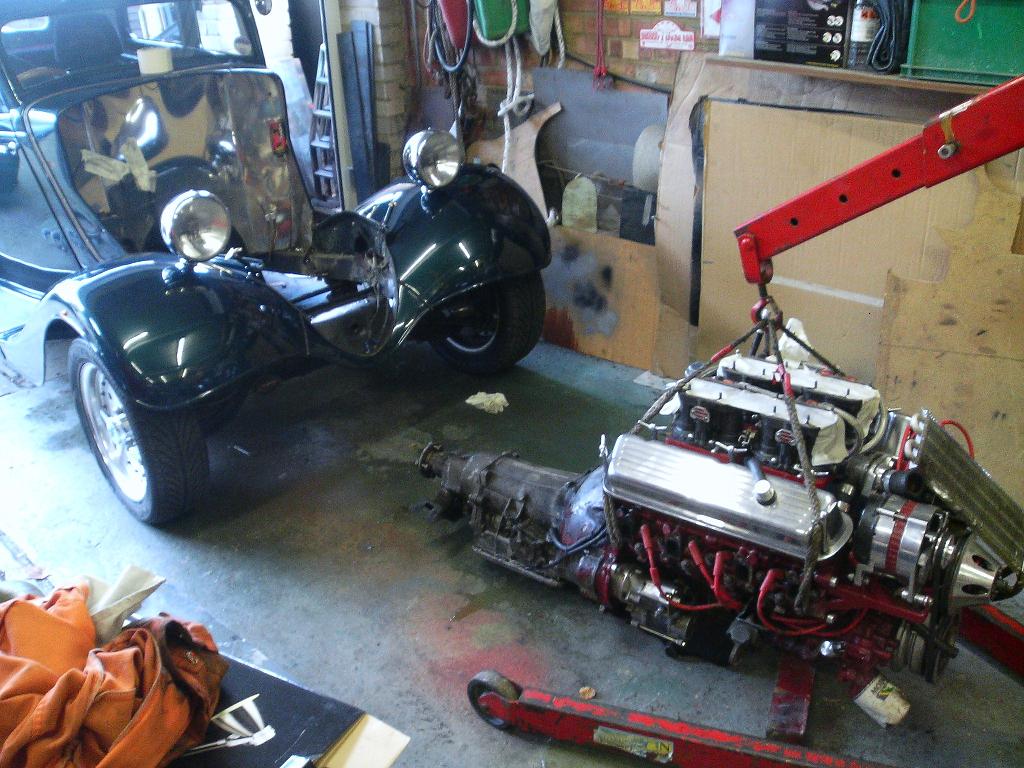 *Wipes monitor* Do you have any more pics mate?
Top 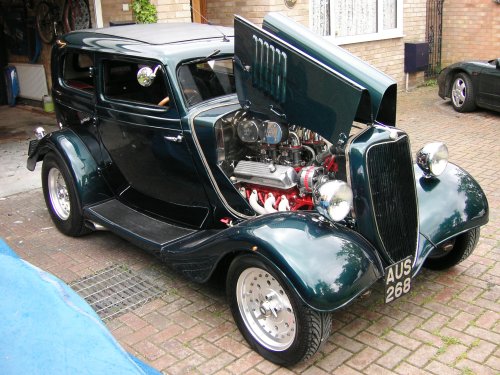 trigger wheel and VR sensor mounted... ( i had to get an EDIS8 from america, and it came bundled with the VR sensor, hence not looking like the usual fiesta one!) should be sturdy enough!!!!! 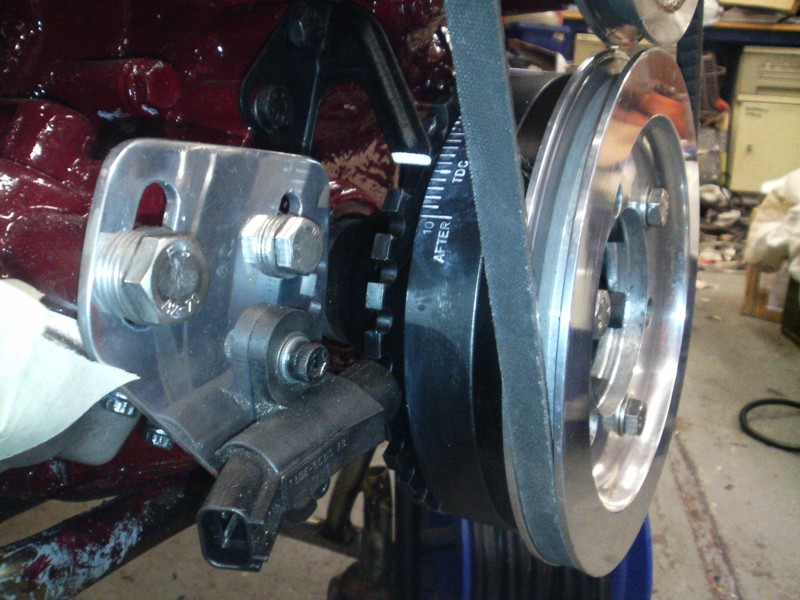 one thing to note on the rover, each coil 'pair' feeds a plug on each bank.. that is, each coil feeds an 'odd' cylinder, and an 'even' cylinder. Had I the room to mount them side by side, in line, there wouldn't be any crossing leads between banks and a neater installation! 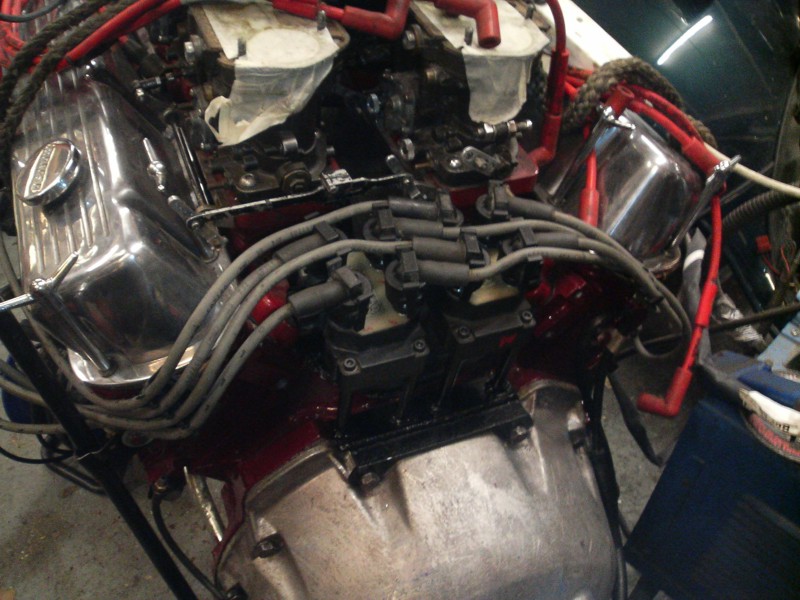 well, the engine is back in, most of the bits underneath hooked up, headers on but no system, and no rad yet, but couldn't resist seeing if it would fire! with the plugs out, and the oil pump primed, I span it over on the key with the timing light on (EDIS only at the moment) and the timing was about 8deg BTDC, close enough for the time being! I did include some adjustment in the sensor bracket to dial this out, but in the excitement, I refitted the plugs, double checked the plug order, and fired it up!

Though, think i may have woken half the village, in it's uncorked state its a tad loud! Oops!

now i've got to put the rest of it together so I can hook up the mjlj and start mapping!
Top

That looks incredible! I wish my MR2 could install engines as easily as that.

right where to start... mjlj fitted up, car all put back together, the moment of truth..... It started really easily, and after a couple of blats around the village (with the exhausts on!) it was a little lumpy, so time to tweak the carbs... a quick cleanout later (well, as quick as 4 carb strip and rebuilds can be) the car was started and running again, the mixtures set up with a color-tune (i bought 4 so I can do a bank all at the same time!)

in the past, as mine was a nightmare to start, i had removed the race-y chokes (36mm) and made up a more conservative set (29mm) after seeing how easily my dads set-up started. I'd often be wondering if it'll start before the battery run out! step one was to fit a geared starter (highly recommended) but was never brave enough to restore the chokes!

now being impressed by the quick starting with the new ignition system, i took the plunge and fitted the big chokes and spun it over with my fingers crossed... no major throttle pumping, no flat battery dread, but a far, far easier start than it ever had been! Hurrah!!!

the other reason for the choke change was a HUGE hole when it's first floored, ie. a traffic light launch! it's so bad that it has to be eased in; if you just floor it, it floods the engine (8 accellerator pumps will do that!), 8 butterflies open, the inlet velocity drops right off and it then either bogs or stalls! Not good

with the mjlj and the basic map (handy as my engine is recommended to have 36degrees MAXIMUM advance), i experienced the same syptoms, and when i had a quiet, wide bit of road i made sure i watched where the map was when it happened! i dialled in some more advance in the appropriate area, the bog/stall/stutter is almost gone, and with a bit of tweaking it should be a distant memory! Hurrah again!

almost all the WOT launch bog has gone,

far reduced coughs and splutters while cruising at light throttle,

actually SOUNDS crisper (a comment made by 2 people so far!)


so i think we can call that an unmittigated sucess! Thanks Brent for all your work, it has been so worthwhile!


PS... it confuses the hell out of people as the dizzy is still there, but with no cap, and they watch the rotor arm going round!!!

Fantastic! Thanks for the update.

later on you could update your ignition map and remove the boosted portion of the load axis so you can realize the full resolution.

would love to see them.

the map still has the full range and even spread, I just lifted the advance figures around the 80-90% TPS, 1800-2500 rpm, where the stutter occurred. i used the traditional method of just adding a bit of advance to the locations the mjlj dwelled on as the car was bogging and stuttering, then smoothed the map around it a bit!! i shall tweak it futher later on!
Top

i shall prob move a rev band down to a 500 rpm slot below the 800 already there, and get a 7 degree startup advance as the 6000 line is redundant!
if you have any hints/tips...

i'll post the final version in the map section later

I really want to hear the quad dellortos running. My dual sidedrafts sound great, yours must sound like the sex!
Top

Another quick tuning session... consisting of a launch while looking at the screen, seeing where the pointer on the 3D map stutters, tweak in a bit more advance at that point, upload and repeat until cooking!!!

not forgetting to fix the map in at the end!!!

now the stutter is all but gone, the first time it's been able to do a clean from tickover launch... ever!!!!

just to keep the pics together....

TPS mounted on the manifold....

Tps lever driven by a slot in the end washer

the whole shooting match.... the bare dizzy does confuse SO many people... it will get chopped off later (it also drives the oil pump)