I’ve just installed a Megajolt system in my Land rover with a 3.5L rover V8 engine and I’m having problems getting the system to spark in “limp home” mode or with the MJ fitted

I’m currently getting no spark at all, even if I switch the polarity of the VR sensor wires

Running through the verification steps, the voltage readings are as follows:

The voltage for the PIP signal when cranking appears to be wrong (should be about 6.5v).

I’ve checked over the wiring and it appears to be correct (http://www.megamanual.com/ms2/EDIS.htm)

Could this be down to a faulty EDIS module or something simpler???
Top

Disconnect the Megajolt to simplify things and dont worry too much about the PIP and SAW readings to begin with.. They arent needed for limp-home mode - only once the engine is running and the MJ needs to control the advance curve are they used.

Pip & saw are pulsed/timed signals, not voltage levels, and the actual voltage readings will be determined by many factors (your meter type, battery voltages etc).. The meter readings are just averages/approximations of the pulse timing. If they *change* that can indicate the presence or absence of a pulse, but only approximately.

The EDIS module needs only 12v supply (and ground), correct power & coilpack wiring, and the VR signal to start in limp home mode. Once you get it ticking over, then you can take the next step with the MJ in the system.

"No Spark at all" - have you actually checked a spark plug by removing it from the engine and resting it against the block while cranking ? Or do you mean the engine isnt kicking at all ?

If you are getting no-spark, disconnect the EDIS and use a couple of clip leads or something to manually *momentarily* (just tap one wire on and off) connect 12v to a coilpack common + and one negative and watch for a spark. If you get no spark this way, either your coilpack is mis-wired or dead, (perhaps faulty plug leads, but unlikely that they would *all* be open-circuit )

Are you using the original EDIS coilpacks, or some other ones ?

Are you sure of the correct coilpack (and EDIS) connector orientation ? Sometimes people mistake the "looking at this end of the connector" diagrams which will get your pins backwards.

It *could* be a dead edis, but thats fairly rare, the modules are pretty reliable/tough things. I havent heard of many (any?) people saying their Edis module was dead. Its the last thing I'd suspect.

Make sure your EDIS +v power is staying on (and at a reasonable voltage - over 10v) while cranking and that it is grounded properly.

Those items will cover about 90% of common problems. let us know how you get on with checking them
Top

With the Megajolt disconnected, I've removed a couple of plugs and ground them on the engine block and can confirm there is no spark.

The coil packs will spark with the EDIS disconnected and a manual *momentarily* short to ground created.

As for the EDIS coil packs, these are the ones provided with the installation kit so I'm assuming these are correct

When cranking the engine the voltage at the EDIS and coil packs are 10.56volts

I’ve attached a photo of the connector wiring, hopefully someone can confirm if this is correct or not… 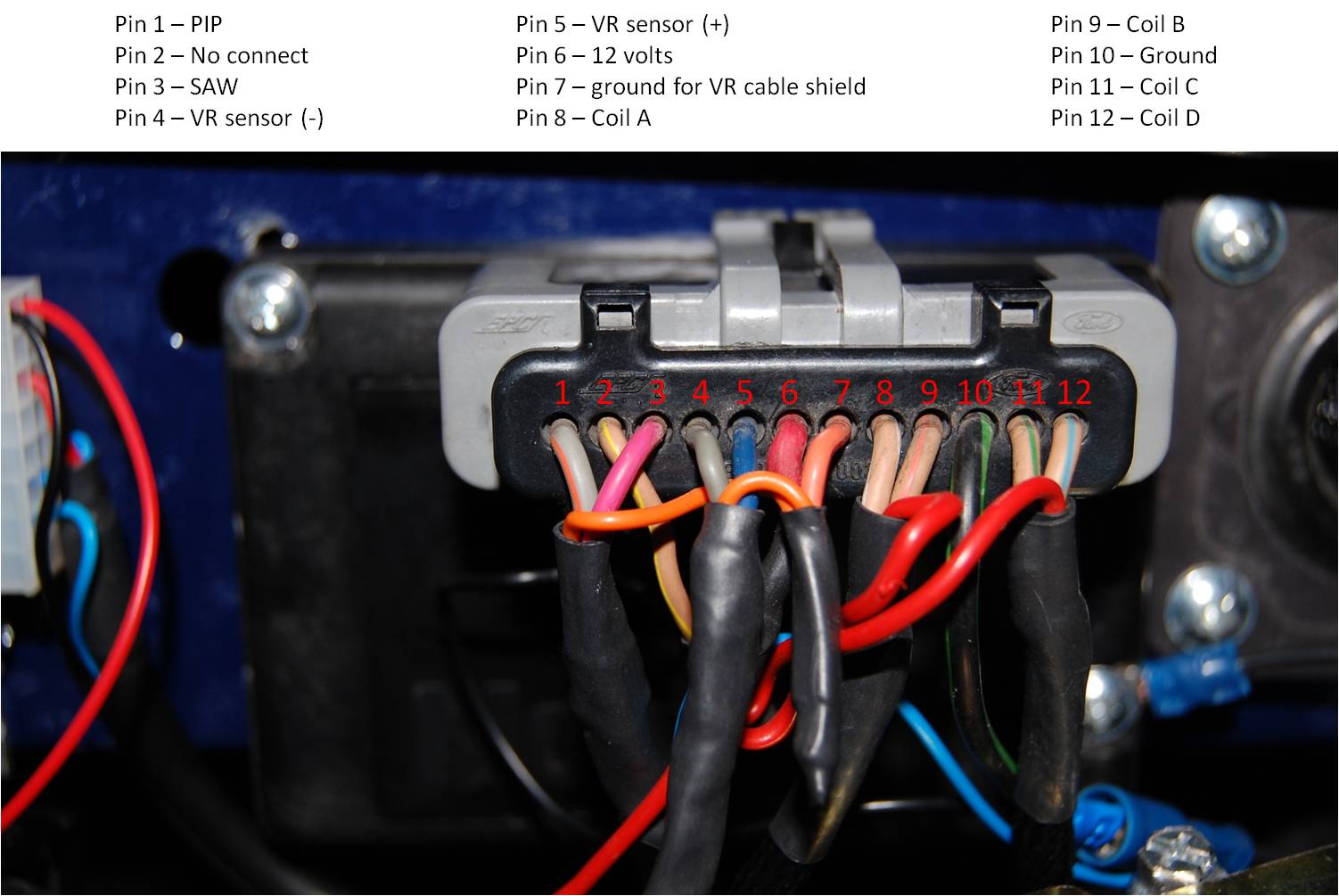 That looks correct to me.

What about your VR sensor, mounting bracket, sensor gap and missing-tooth wheel ? You have a pic of them handy ? Did you make your wheel yourself or buy them pre-made ?

The EDIS wont fire the coil packs (or do anything) without a good VR sensor signal. If you have access to an Oscilloscope that will let you see the VR sensor pulses/wave.

If not, the VR sensor AC voltage is a *rough* guide.

1.28v sounds a little low according to the troubleshooting table on the install guide above. According to that its supposed to be around 2.5v, although Ive never used a meter to measure it myself, since I have a O-Scope. I assume its at 0v when not cranking ?

Have you checked the gap and sensor alignment ? Got the missing tooth in the right spot relative to the engine ?
Top

The wheel was also provided as part of the installation kit, the sensor is as close as I can get without it physically being damaged during the rotation of the crank.

I’ve managed to get an oscilloscope from work and measured the wave forms as per the images.

Fortunately the supplier of the EDIS module has a bench test system and has offered to test the EDIS to verify the functionality. 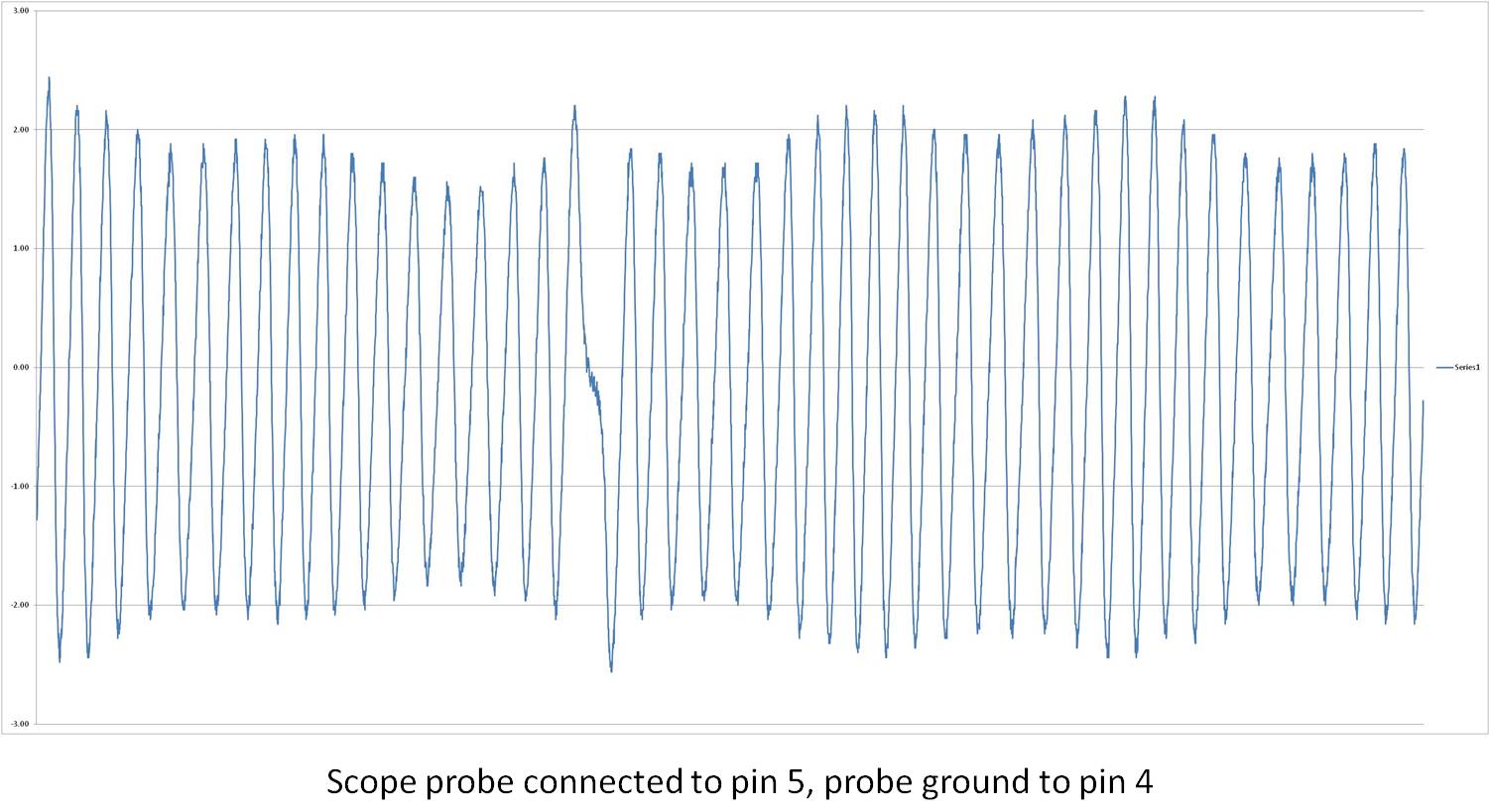 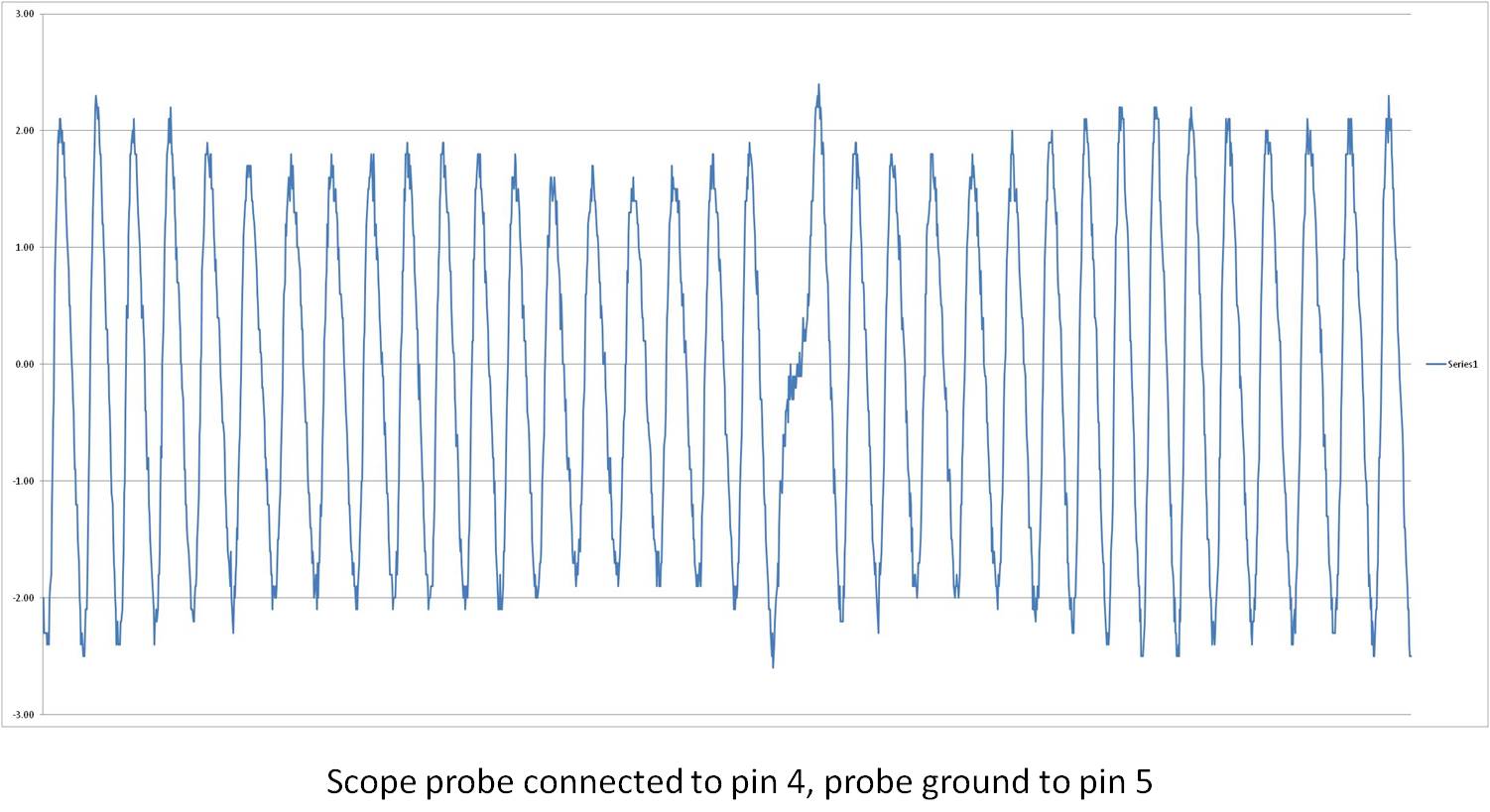 Well, that also looks good to me.. 'Scope pics ! wasnt expecting them !

Theres a slight amount of variation in the peak levels there that is suggestive of a small amount of runout in the wheel or wobble in the sensor mounting (or it could just be AC noise), but it doesnt look like enough to disturb the signal.. You can clearly see tooth waveforms, and the missing tooth in the wave and the way it reverses when the pins are the other way around..

Assuming the vertical scale to be volts, the peak voltage looks a little bit low to me, although I cant remember for sure what levels I saw the last time I scoped a wheel - according to this page, you only need to reach around +/- 0.5v swing to make the EDIS happy. http://www.msextra.com/forums/viewtopic.php?f=4&t=11592 , so yours should be ok.

If you still have scope handy, you could look at the EDIS's PIP output while cranking - you should see something like this if the Edis is decoding the VR signal correctly.

If you do see that, then the EDIS is interpreting the VR signal correctly and thinks it should be firing the coilpacks (if the wiring and coilpack type is correct (should be if you bought a kit from a supplier) - got a photo of them and their connectors/wiring ?)

If you dont see that, (or you dont have the scope handy anymore), then you might as well get the EDIS checked or changed if its not going to take too long.. like I said, its pretty rare for them to die, but I dont think its unheard of.

Your ealier message said the PIP signal was sitting at 12.3v not cranking, and dropping to 10.8v cranking (which would probably be due to the overall battery voltage drop while cranking).. that sounds like it *isnt* putting out the 0-12v swing waveform it should be, which usually means VR signal isnt correct (which you have checked), no power to the eDIS (which you have checked), or possibly a dead EDIS which is next on the checklist by the sound of it.

Another maybe way to check the PIP signal (if the scope isnt around) is reconnect the Megajolt and crank the engine with a laptop connected in the gauge display mode, do you get any RPM readings while cranking ? However, I think the MJ reads 457 as a lowest RPM, so if your engine cranks slower than that, you might not get a reading until it starts (which it obviously isnt doing yet), so this test isnt conclusive, just something to check if its convenient.

Its starting to sound more like a dead EDIS, all your checks in other areas look good so far - the only unknown to me now is the coilpack type and wiring.
Top

Thanks for all your help guys….
Top

Well, there you go, you were right with your first guess.

Still, Its good to run through all that stuff.. Dead EDIS's are pretty rare, but youve just proved they do happen