I have started an alternative dashboard software project specifically for driving a dedicated display from low-end hardware like the BeagelBoneBlack (BBB), Raspberry Pi, etc.

It's not intended to replace the full functionality of the race capture application -- only to act as a display.

The primary goal is small footprint, fast startup, and flexible layouts: currently it's ~2s on the BBB with a debug build. It has only a handful of dependencies. You can put gauges anywhere on the screen you want, and I'm working on designing a flexible scheme for managing alarms.

Currently it builds and runs on my x86 laptop, as well as the beaglebone black. It *should* work on anything that supports DRM dumb buffers, which, unfortunately, rules out raspberry pi for the moment -- though I think it may work with the vc4 driver.

I plan to release some buildroot images that boot directly to the uDashBoard on the BBB. 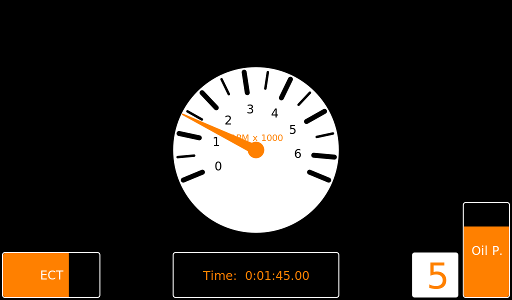