I would like to see an output display as Spockie-tech has done with his cool nixie tubes, but with an illuminated LCD screen that can be mounted onto a dash. http://www.autosportlabs.org/viewtopic.php?t=2705

bargraph to indicate rpm and MAP/TPS

indications for outputs which can be named

possibly a stopwatch (button activated) for driver lap times, which can be logged or referred to

It could be made as a generic single display or possibly a live scroll through display to choose from a number of different screens to emphasis any piece of information, such as laptimes with last 5 times and current lap time.
1310 A-series Mini, lightened and built myself. V4 board and loving it

I have 100 surplus LCDs sitting in a bin waiting for a project like this. Could be fun...
Brent Picasso
CEO and Founder, Autosport Labs
Facebook | Twitter
Top

Chop chop, it'll save me a world of pain!! lol

What make and model number of screen are they??? I'll start looking into seeing what i can produce circuit wise.
1310 A-series Mini, lightened and built myself. V4 board and loving it

This sounds very interesting. For now I'm driving without working tachometer. Although, it's to see the tuner knocking on the tachometer because it;s not working, it is usefull to see how many rpm it's running.
Top

Right been and ordered my screen today. I ordered one of these and will be picking it up tomorrow http://uk.rs-online.com/web/search/sear ... &R=5326818 It can have 20 characters on 4 lines in total so once i have it working/talking to the arduino then i will have to figure it some screen info for it to produce. It could create a bar graph as an indication of output with a title at the beginning such as rpm or read figures. With 4 lines it could have RPM, engine temp, map/tps value/percentage, current advance and also maybe flash a warning such as OVER TEMP WARNING (if engine is over heating) KNOCK WARNING (if a knock sensor is fitted). More thinking on this front.

Along with the screen i ordered an arduino http://uk.rs-online.com/web/search/sear ... rm=6961655 (you can get these as clone boards a little bit cheaper off ebay but not a great deal cheaper).

And some high current voltage (upto 1A) regulators to supply power along with a bread board off ebay for some prototyping.

I should have some results next week fingers crossed

Sweet! I hate not being able to make my tach work

Right so i now have purchased an arduino duel.... whatever it is. There seems to be quite alot of help on the arduino forums and so far i have managed to get some LED lights to flash (wow you say), but more practice will encourage more complicated systems.

I also have a 20 x 4 LCD screen http://uk.rs-online.com/web/search/sear ... &R=5326818 which i have already managed to blow the background LED (no current limiting resistor), but then couldn't find anywhere saying it needed one (silly me). At only £8 it is hardly gonna break the bank, but i'm sure i can bodge a new LED as a backlight.

So i have 20 x 4 charcters to play with so initially i will go with:-

Underscores _ are really spaces so they can be counted as spaces for the time being. The X's are for figures or blocks for the bar graph.

Now all I need to do is workout the required programming to get the display to work correctly. I feel some tuition from spockie tech is needed here please. 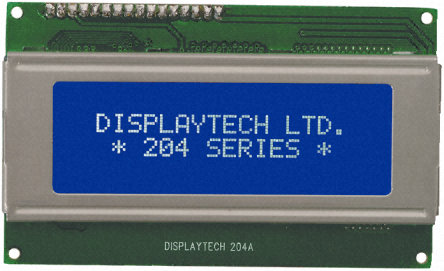 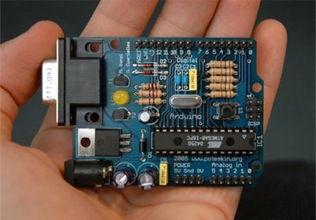 Designer2k2 has done quite a bit on automotive stuff for VW's, however most of their site is in German

You could always add a Lambda to your exhaust, then you could do emissions too

There are a lot of ways to make an Arduino talk to your standard style (Hitachi 44780 controller chip - there are others to watch out for).

The easiest way is to wire the LCD directly to the Arduino in either 8-bit or 4-bit parallel mode. which allows you to use the standard pre-written Arduino libraries to talk to it.. This means simpler coding but it ties up either 6 (4 bit mode + Enable and Read/Write) or 10 (8 Bit mode + Enable + Read Write) of the Arduino's I/O lines. This might not be a problem if you are only planning to hook up a few other widgets to the 'duino. If you want to hook up the Megajolt, a swag of other sensors, and assorted blinky lights and buttons, maybe not such a good choice. Wiring diagrams are on the Arduino sites near the LCD library documention. IF you cant find it, let me know and I'll find a link.

Direct wiring allows full-speed communication between the Arduino and the LCD, meaning you can update the screen hundreds of times per second.. Which might be important if you have any rapidly changing data on the screen. Bargraphs or fast-moving numbers for example. Remember that LCD's dont change that quickly though.. especially when they are cold, so if you want really zippy numbers, better to go for an OLED display rather than an LCD.

To minimise use of Arduino Pins that could be needed for other purposes, you can hang a "serial interface" (sometimes called a backpack) off the LCD which is available from a variety of vendors (Sparkfun etc) - many arduino distributors will stock them. usually about $10-$20.. they cut down your I/O pin requirements to 1 for the serial data, but have the drawback that they are usually talked to by the arduino at 2.4kbps to 19.2kbps baud (bits per second), which slows down your maximum screen update speed to a few per second. Good enough for slowly changing data like temps and so on where 1-3 updates per second are enough, but useless for digital tachos or other twitchy readouts.

In-between solution is to use what I did, which is an I2C backpack addon board for the LCD (SpikenzieLabs.com) .. which is a form of serial backpack that uses the I2C protocol at either 100Kbps or 400Kbps. Uses 2 I/O Pins (clock and data), but still gives good screen update speeds. The only downside is you need to include the I/O routines to drive the LCD in your codee, since they arent an arduino library, so slightly more software complexity, but since I have already written them for you, not that hard

So, depending on your need for I/O pins on the board, your required screen update rate, and your willingness to fiddle with software a bit more determines your best choice. let me know and I can go into more detail once I know which option you prefer.
Top

Another option if you're willing to throw a few more dollars at the idea is this website I recently came across
The Scooter-puter. http://www.janspace.com/b2evolution/ard ... ooterputer

A *very* nice implementation of a nice color OLED touch screen and an Arduino that you could probably glean some ideas from. I'm tempted to update my Prototype KarrKontroller Arduino Nixie Driver widget with something like that

I seen that scooterputer and it looks very well made. Although its a step too far for me at the moment, will definately keep it in mind though.

As for the current plan i was going to connect the LCD in a 4 bit parallel mode. I was going to get the arduino to display the info i have indicated in a previous post then maybe add a couple of more inputs to display and possibly the servo choke control at a later date, but i wont be by any means using all the inputs and outputs of the arduino.

Your help is much appreciated Spockie

If you need to upscale your processing power - http://www.jkdevices.com/arduino-megamini
Top

A bit more, but slow, progress with the LCD. The first LCD didn't seem to work so i ordered another 20 x 4 from somewhere else. After getting it to display 'Hello World!', I have now created a couple of example screens on the LCD whilst i practised (shown below). It took me a while to learn how to program different screens and then making the arduino change screens in 1 program.

My current design is to have a single flashing cursor for 5 secs (so it looks like its booting up), then displays "POWERED BY MEGAJOLT" and finishes with the info screen on constant loop. I found anything less than 0.5s refresh rate (with most characters utilised) a couple of the lines of the LCD to flash when looked at an angle and at really high refresh rates the same lines has a strange scrolling effect on the pixels of the characters.

Check out the pics so far 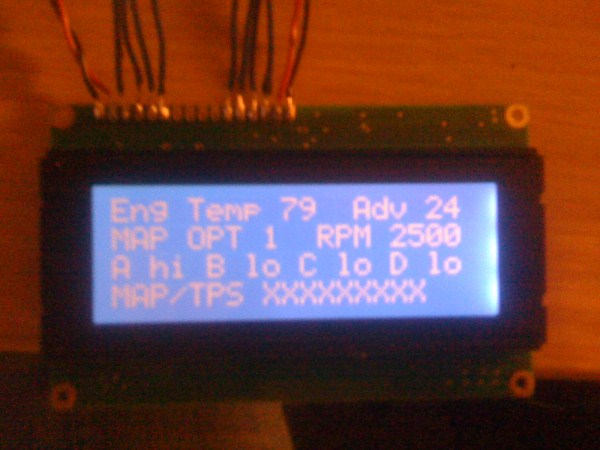 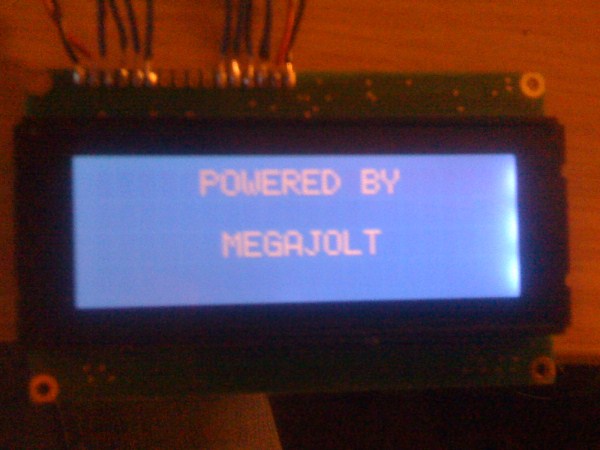 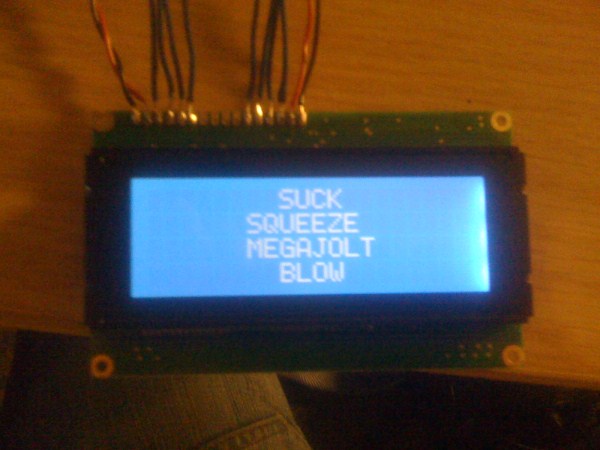